Q. Susan Wise Eagle in Wrangell, Alaska (up near the top of the beautiful Inside Passage) writes: "In episode #123 a caller had problems with animals getting into her garden and eating her collards. You suggested {quote} 'meadow shrews', which don't exist! There is no such creature of this name. And Shrews are insect eaters; they're related to moles, but they do NOT burrow. One of the many species of voles are called meadow voles, which are vegetarians.

A. Busted! Over many decades of making mistakes like this, I've talked about voles a lot, and remember hearing some bum on the street call them 'meadow shrews'. Which, as you correctly state, are a non-existent mammal, although shrews do abound in meadows. (Yes; I'm grabbing for straws now, kats and kittens.) And I was mentally distracted by the meadow vole, which is a real thing. "Waiter! More straws over here!" (Just no plastic ones...)

So my real jeopardy-worthy answer (actually a question) is: "What are voles?" They're vegetarians and really good at getting into gardens. But don't rule out mice either. Or heck, even rabbits if the garden isn't fenced. But if the culprit also dug holes or tunnels, I'm going home early today.

Q. Carol in Sudbury, Mass writes: "I've had this rose bush for years; it was still blooming in October when the frost came. I just noticed that it had fallen over, and when I picked it up, it had no roots at all and bite marks on the stem. Was it moles? Voles? Or something else?? Never had anything like this happen before!"

A. That's what all the girls in Sudbury say, Carol. Anyway, this would also certainly seem to be the work of voles, who are famous for chewing bark and eating the roots of plants like hostas and roses and devouring Spring bulbs. Moles, as we often like to remind people, are carnivores, dining on beetle grubs, earthworms and cicada larvae (which will be abundant in this emergence year of Brood X). Moles don't eat plants but can make a mess of your lawn while tunneling for food. They're also really creepy looking.

Q. Brendan writes: "Hello Mike & Ducky! As the snow melted here in Lititz, PA (in Lancaster County), a weird pattern was revealed in a large area of grass in my yard. This serpentine pattern of dead grass made me think of moles, but the pattern is flat, no raised tunnels. Could this be moles with collapsed tunnels? How best to deter the critters?"

A. Guess what? It's vole time again! All that snow kept the furry pests safely hidden from predators while they wandered around your yard. These 'trails' in lawns are a sure sign of the voracious vole. (In warmer times, the trails are just highways of flattened grass; but in winter they munch as they meander.) One defense is to apply a castor oil product specifically designated to repel moles and voles.

It would also be a great idea to install a raptor perch or three; a crossbeam on a sturdy pole mounted about six feet off the ground. Now that they have no snow cover, your voles are easy prey for owls (THE major predator of voles.) The owls will perch there every evening, the (mostly nocturnal) voles will come out to play and before you know it the ground underneath will be mulched with owl pellets. 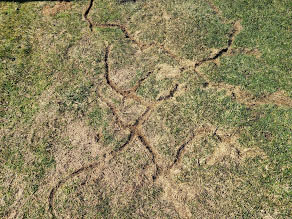 Q. Cindy in Salina Kansas writes: "Something has burrowed under my hoop house frame and taken up residence there, dining on my spinach. I've read your articles on moles and voles, and don't think it's either one of those. There are two holes inside the hoop house and they are so HUGE, my hori-hori knife can disappear down them. So could a baseball. I have seen groundhogs about half a mile away from here, could it be one of them?"

A. I am always happy when listeners supply the answers to their own questions; it's like a game of Jeopardy where everybody wins. And I am DARN glad that Cindy spotted that woodchuck, because Kansas may be the burrowing mammal capitol of the world!

I found a fabulous resource published by the Great Plains Nature Center called "A Pocket Guide to Kansas Mammals". Well, you better have big pockets because here are just a few in the burrowing category: The Least Shrew, the Eastern Mole, and The Nine Banded Armadillo (all carnivores that burrow); the Eastern Cottontail (a plant eater that does not burrow but often uses existing ones); the Black Tailed Jackrabbit (Plant eater; does not burrow but can jump six feet high over a fence that's 20 feet away); the Eastern Chipmunk (burrows but doesn't eat a lot of leafy greens); the 'Woodchuck' ('groundhog' to the rest of the world; extreme plant eater that builds endless BIG tunnels); the Thirteen Lined Ground Squirrel (burrows; eats anything); the Black Tailed Prairie Dog (plant eater; creates massive tunnel complexes); the Plains Pocket Gopher (Plant eater and complex underground tunnel builder); The Hispid Pocket Mouse & Ord's Kangaroo Rat (plant eaters and burrowers); the Northern Grasshopper Mouse (burrows but mostly eats meat); and finally, the Prairie Vole (plant eater; makes tunnels).

Thank you for spotting that groundhog!!!!