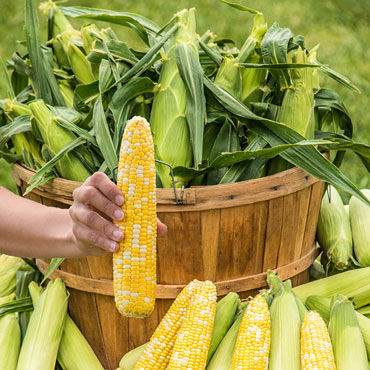 We've been growing Simply Irresistible in our test gardens for the past three years—and it has consistently surpassed other varieties in both taste and garden performance.

A Taste-Test Winner! Simply Irresistible™ won every one of our corn taste tests for the past three years. No other corn has a better flavor or texture. You'll experience rich sweetness and tender-crispness in every bite, and the ears offer nice, deep kernels that you can really sink your teeth into.

Great Appearance & Amazing Husk Coverage! The 7½-8 in. ears are filled to the very tips with gorgeous golden and white kernels. Rich green husks cover and protect the ears making it nearly impossible for earworm borers, sap beetles and other critters to get at the inviting kernels inside.

Outstanding Vigor! Simply Irresistible™ has larger seeds that tend to germinate more quickly, allowing them to pop out of cool soil earlier in the season with plenty of vigor and quick growth. The larger, more rounded seeds are also a bonus for those who use a planter—the seeds flow through planters better.

Earlier Production! While maturity is variable based on climate and weather, we've found that in our trials Simply Irresistible™ matured up to a week earlier than Gotta Have It!