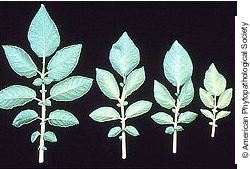 Sulfur increases the protein content of crops and stimulates more rapid root development during early periods of growth.  A lack of adequate sulfur is almost always a limiting factor in garden soils. Visible symptoms include a uniform yellowing and mild upward curling of leaves on deficient plants. (Nitrogen deficiency shows confusingly similar symptoms.) A moderate to high level of sulfur is especially required for potatoes.

Degrees of sulfur deficiency in potato foliage: The most deficient, with characteristic yellowing and curling, is on the right.

« Back to Nutrient Deficiencies