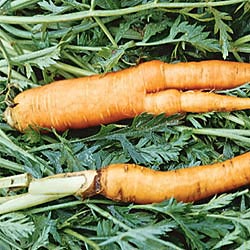 Nematodes and What to Do if they Attack

Nematodes are only 1/50" long on average, with thin, translucent bodies. They are a common pest, found in large numbers across the U.S., especially in the Southeast. They generally like vegetables, ornamental plants and trees.

How to Spot a Nematode Infestation:

Nematodes are hard to spot because of their size, but commonly infested plants are usually stunted in growth, lighter in color and yield less fruit than healthy plants. The roots have swellings, galls or knots which is where the nematodes live. The trick to pinpointing a nematode infestation is to look for knots on the roots of sickly plants..

Our Beneficial Sf Nematodes will eliminate an infestation quickly, easily and naturally!

How to Prevent Future Infestations:

Keep in mind that soil rich in organic matter is a favorable environment for fungi, some of which control plant-attacking nematodes. Be sure to maintain a high humus content in garden soil by adding compost and growing a cover crop to turn under in spring. Root-knot nematodes, as their name suggests, attack the roots of your plants and will be captured and destroyed when the plant is turned under.


« Back to Solution Finder