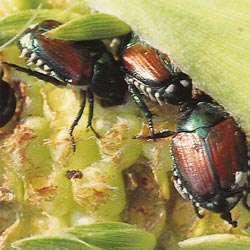 Japanese Beetles and What to Do if they Attack

What is a Japanese Beetle?

The adult Japanese beetle is metallic green and copper and grows to ½" long. Larvae or grubs are grayish white with a brown head, and their fatty bodies are about ¾" long. The adults especially like beans and corn but will eat almost any plant, often skeletonizing the leaves. Larvae chew on the roots of lawn grass, beans, beets, sweet corn, onions and tomatoes. Growth of grubs and most of the root damage happens in June, and damage from adults occurs late June to early September.

How to spot a Japanese Beetle Infestation:

Most often you'll only see adult Japanese beetles while they're eating flowering plants in late June to early September. However, when the grubs eat away at your plant roots in June, they severely reduce crop yields and can kill grass. The grass will turn yellow and brown where they've fed on the roots, and because the roots are no longer keeping the blades attached, you'll be able to pull it up easily. You'll most likely spot the adult beetles during the day in clusters of twenty or more hanging from fruit or flowers. To look for Japanese beetle grubs, push a spade just under the sod and turn it back. If you have a significant grub problem, you'll be able to see them.


« Back to Solution Finder