How and When to Fertilize Your Lawn

How Often Should You Fertilize Your Lawn

Best Fertilizer to Use

A healthy lawn enhances curb appeal and makes your space more inviting for social and recreational activities. While many lawn care products help your lawn look its best, fertilizer is a must-have for most yards. Not only does proper fertilization keep your lawn healthy and looking good, it can reduce the encroachment of weeds and make your turf less prone to insect and disease damage. Read on to learn more on how and when to fertilize your lawn.

How Often Should You Fertilize Your Lawn

The most common lawn fertilization mistakes are:

Best Fertilizer to Use

Before selecting a fertilizer, conduct a soil test or use a soil analyzer to find out what your soil needs.

When buying lawn fertilizer, there are some common terms to know.

A slow-release fertilizer is water insoluble and delivers the nutrients over a longer time. While the grass is slower to green, it has a longer residual greening and growth response. There are lower chances for leaf burn and nutrient leaching. Slow-release fertilizers are often only applied once or twice a year.

When applying granular fertilizer, use a broadcast or drop spreader and apply at the recommended rate. Avoid over fertilizing and avoid applying fertilizer right before it rains. A downpour could cause the fertilizer to runoff instead of being incorporated into the soil. After applying fertilizer, water the yard. For most soils, about ½ inch of water is adequate 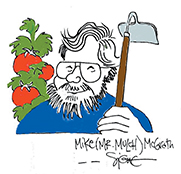 Q: We've been using a well-known national service (Scott's) for our lawn care, and they fertilize several times through the summer. But I've heard you say that lawns don't need to be fed during the growing season. How often do we really need to fertilize our lawn? Thanks; we listen to You Bet Your Garden on WBST 92.1 FM.

A: Thank YOU for listening to the show via your local station (in Muncie, which is just to the North of Indianapolis).

Now, let me start by saying that over-feeding of lawns and feeding them at the wrong time of year puts a lot of chemical fertilizers into the environment that our poor beleaguered planet doesn't need. AND it weakens the lawn, causing the grass to grow too fast, leading to pest and disease problems. And water pollution. In fact, that's why Maryland and Virginia just passed new laws regulating the feeding of lawns; those laws were specifically passed to try and protect the Chesapeake Bay and the waterways that lead into it. They were prompted, among other things, by research that found that a staggering 44 percent of all of the fertilizers sold in Maryland were going onto lawns.

Yes, that IS crazy. So congratulations to the lawmakers in those states for acting to stop the madness, despite intense lobbying by the lawn care industry.

Now, to our question; these new regulations pretty much mirror my basic advice: If you have a cool season lawn, like bluegrass, rye or fescue, it should be fed twice—once in the Spring (the new laws specify March 1st as the earliest possible date) and again in the late summer/early fall (before November 15th, legal wise).

And our listener is correct that summer feedings are bad, at least for a cool-season grass. Bluegrass, fescue and rye are already stressed at the height of summer, and feeding them just makes things worse. BUT, Dick might have a warm-season grass, like zoysia. If that's the case, then his grass should be fed in the summer—but only in the summer; two very light (zoysia is not a heavy feeder) equal feedings, one after it greens up and another before it goes dormant.

How much should you feed each type? Again, I think the new laws got it right; each feeding should deliver just under a pound of Nitrogen—the primary lawn food—per thousand square feet of turf. No phosphorus—which is the worst water pollutant of the Big Three chemical fertilizers—unless a soil test shows it's necessary.

And an important side-note: people should always return their clippings to the lawn; those clippings are 10% Nitrogen, and give the lawn a bonus feeding every time you mow—a bonus that's legal and safe for the environment.

Which leads to a question we frequently get: Doesn't leaving the clippings on a lawn cause a build-up of thatch?

No! In fact, it's just the reverse. Thatch—an unsightly build-up of dead, browned-out stolons at the soil line—is caused by overfeeding of chemical fertilizers. Returning clippings to the lawn—especially in pulverized form from a mulching mower—increases biologic activity at the soil line and reduces thatch. So clippings are a cure and not a cause.

Q: And, as luck (and an enormous number of emails to choose from every week) would have it, we also have a related question from someone who lives in one of the states with the new lawn care laws: Doug in Fredericksburg, Virginia (where I'll appear at the big Home Show on March 22nd and 23rd!), who writes: "This year I'm turning over a new leaf and taking your advice to use corn gluten meal on my lawn. I've read articles on its use, but none were clear on when to apply it. When is the best time to apply corn gluten to my lawn?"

It's a moving target as opposed to a specific date if you want the most benefit, Doug. Corn gluten is a perfect lawn fertilizer—it delivers pretty much exactly the amount of Nitrogen the new regs specify, and in a natural slow-release form that's ideal for both the lawn and our waterways. But, as we've mentioned many times, corn gluten meal is also a natural pre-emergent that can prevent the germination of dormant seeds, specifically crabgrass. And to both 'feed and weed' you need to apply the corn gluten just as your local Forsythia and redbuds begin to bloom.

Or, more specifically, when soil temperatures reach 55 degrees F. as measured four inches down, which you can do with a soil thermometer or maybe via your state extension system's website. It's also when nearby bodies of water reach that temperature, so Doug can monitor the Chesapeake Bay, and get his gluten down when it starts to approach 55. And that's just sweet: Paying attention to the Bay will help you protect the Bay.

Here's a link to the new Maryland regulations, with thanks to the state for making it 100% easy to read and understand. Oh, and some of Virginia's new lawn fertilizer laws took effect on January 1st; with the remainder becoming law on July 1st. They're very similar to Maryland's laws.